The Odenton Heritage Society is committed to preserving buildings and landmarks with historical significance in Odenton. Over the years, the society has raised money and donated countless volunteer hours to preserve three key structures. 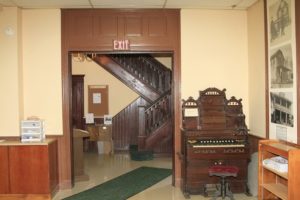 Old Masonic Hall – Located at 1367 Odenton Road, the former Masonic Hall served as the meeting place for Odenton Lodge 209 of the Ancient Free and Accepted Masons from 1912-2001.  The OHS acquired the building in 2001 and it is now designated as the Odenton Heritage Society Historical Center which serves as a local history museum, public archives, the Society’s office and a community meeting place.

The second floor of the Center houses a museum with artifacts, photographs and text displays outlining the rich history of Odenton. The Historical Center is open on the first Sunday of each month from 1PM-4PM.  The OHS has completed a good deal of renovation to the interior and the focus of attention is now placed on renovations to the exterior of the building to have it look as close to the original as possible.  The building was officially placed on the National Register of Historic Places on July 25, 2022.

Old Bethel Church – Located adjacent to the Historical Center on Becknel Avenue, this church was constructed in 1922 to serve a congregation displaced by the construction of Camp Meade. It continued to serve as a place of worship until 1957. In 1962, the Soroptimist International of Severn Run bought the building, and it served as Odenton’s first public library from 1962 to 1969. The Soroptimist International of Severn Run donated the building to OHS in 2001. OHS has since worked to preserve the building, and installed a new HVAC and electrical system.

Citizens State Bank – The “Old Bank Building” has stood near the Odenton MARC Station since 1917, when it opened as the town’s first bank. Over the years, it has served many other roles, including a neighborhood grocery store and Railway Express Office.  The building closed in 1966.  The OHS bought the building in 1993 to restore and use as their first museum.  When completed in 1994, the OHS was awarded the Annual Orlando Ridout IV Award in recognition of an outstanding restoration effort.  It was placed on the National Register of Historic Places in 2013.  Today, the building is leased by the OHS to a local coffee shop and a portion of the building is a small museum.