In 1917, the Army built a huge training camp – a wooden city named Camp Meade — two miles west of Odenton.  Thousands of soldiers fighting the “war to end all wars” left their mark on the small railroad town.  Doughboys did their banking at Odenton’s newly built Citizens State Bank.  Soldiers and officers alike joined the Masons, and others found rest and recreation in Odenton’s Salvation Army hut or Epiphany Chapel and Church House.  Many of Odenton’s young men went off to war. 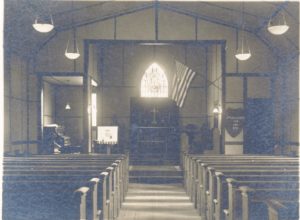 The Odenton Heritage Society plans to commemorate the World War I centennial with displays in the Bank and Masonic Hall, and with a special issue of Heritage Times.